Fabulous day yesterday doing Punch and Judy (or should I say Joan) in Welsh at Ysgol Croes Atti @ Glannau Dyfrdwy Open Day. Also performed a magic show with help from the children of course. And every word in Welsh. Here are some of the highlights.

Ho-ho-ho, merry Chrimbo. And as we are now properly into advent, which does not begin in August despite what Tesco seems to believe, I think I can safely say that!

The lines above are an introduction to the latest in our lineup, the big beardy man himself, Father Christmas, Siôn Corn.

He began life in this incarnation as a wizard from the Kasperletheater.

As ever the process began by removing the wizard outfit.

Siôn is a rum cove and being that I am emphasising the Victorian of Mr Punch I wanted to avoid an overtly Coca cola coloured Santa. So with an eye towards the Scandinavian tradition and Dickens’ Ghost of Christmas Present I decided to be in with an earthy green coloured base. To go over this I found a nice deep ruby coloured cloth, I think it may have been an offcut from some theatre curtains. I made a long waistcoat from this and trimmed it with some white fur culled from a cheap Santa hat. This is bound in memory of Edward Woodward as the Ghost with a thick black belt, felt rather than leather in this case and a cardboard buckle.

His hat I have taken fewer liberties with as I need him still to be recognisable to the younger generation as Father Christmas (or you end up with the story that accompanied The Lion, the Witch and the Wardrobe, where it was said that when that man appeared in that story many children, especially in America for some reason, didn’t know who he was!) Consequently I used a bit more of the cheap Santa hat to make, well a Santa Hat.

And so Siôn was almost there, but as I said he owes more of a tribute to Dickens than Coca cola so I wanted him to have one last tricksie addition. How can he deliver presents without his sack? But not just any old sack, this is a sack with a secret! But what that is and how it works I shall be keeping close to my chest for now!
So until I see you next, be good boys and girls because you know who’s watching, don’t you?

Judy, or Siwan (Joan) to give her her Welsh moniker, is one half of Punch and Judy and therefore as vitally important to get right, probably more so, than anyone else in the pantheon with the exception of the big man himself. She is the ying to his yang, or should that be the other way around? Either way I took the decision to start at the same place with both of them and purchased two Kasperl puppets.

Although these two were essentially the same model or variety of puppet due to being handmade there were naturally subtle differences between them. I felt one had a softer, narrower face than the other, slightly the more feminine of the two. This then was to be the face of Judy, but this girl needed a makeover!

I approached her makeover not as a naturalistic thing, my Judy was beginning as a man in drag after all, so u decided to come at her rather as a pantomime dame. It is at least a field of makeup in which I actually have some personal experience! So top down I thickened and arched her eyebrows, gave her some lurid green eye-shadow, thickened and extended her eyelashes (girls gotta look good), added some glitter to her cheeks and the end of her nose to echo Mr P’s colourings, thickened and more

significantly outlined her lips and finally added not one but two beauty spots (making her twice as beautiful as Marilyn Monroe).

Then came the new do! I always had it in my head that she was a ginger, in the words of the song when it comes to getting a dirty job done. The big trip to Abakhan found us a lovely packet of angora wool of just the right shade of red and my own good lady stepped in to plait it for me.


The outfit which can be seen in the above image is a Mrs Llusern original. It was I must say pared down from the original design which had underskirts and all sorts, I’ve no doubt it would have looked fantastic but who would have seen it in all its glory? The end result stands on its own in any case.

I was asked what kind of head gear I wanted for her. The choices were a mop cap or a bonnet, and I thought a bonnet might be a bit fussy for an old scrubber like Judy and besides it would hide too much of her lovely locks!

So there she stands in pinny and gown for all the world to see. I am immensely proud of her and of course Mrs Llusern, her official dresser and if I can only add one more thing, it is telling that she is the only one of the case who has not needed some running repairs so far. Clearly these women folk know how to look after themselves. 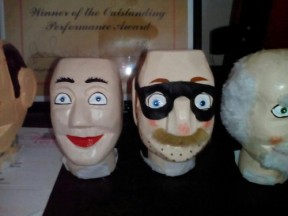 Seppl on the left 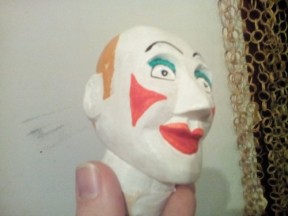 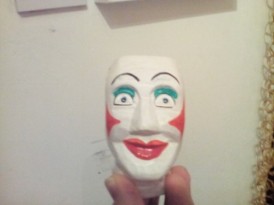 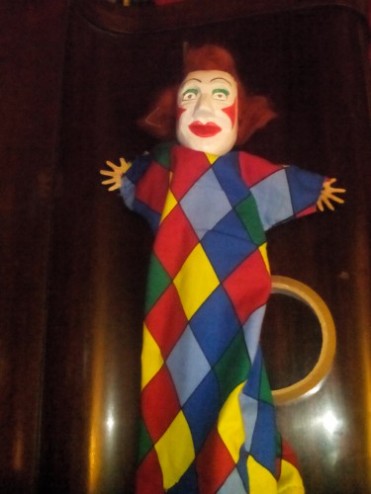 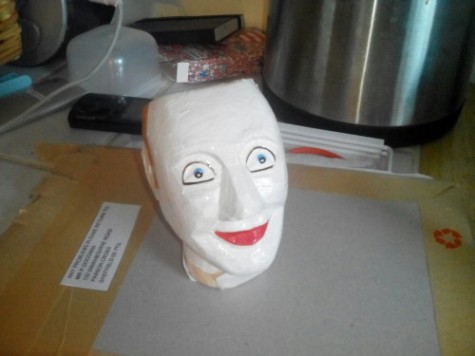 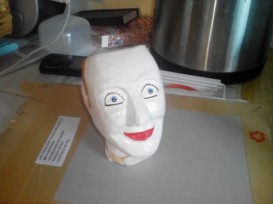 Oh, the colour, it brings out your eyes!

Hello again boys and girls. Allow me to introduce the first of our new lineup of characters, Joey the clown.

Joey is of course based on the great British clown Joseph Grimaldi as is traditonal, and his face paint reflects this. From the wide mouth to the triangular cheek patches and faint eyeshadow, I have attempted an approximation of the original Grimaldi facepaint and hairstyle, where I have deviated is in the colour of the hair, which ought to be blue by rights (according to most illustrations)but we had ginger left over from Judy and as it does crop up in a few pictures of him we decided to go with that in the mohawk that he seemed to prefer.

The puppet itself started life as Seppl from the Kasperletheater and the first step was to remove his hat and body which left him like this;

Then I provided him with a base coat of emulsion, avoiding of course his eyes and mouth.

The result is actually slightly creepy, something of the Jason Voorhees about him but thankfully not for long as I was about to provide the final touches, widening the mouth, faint eyeshadow, the cheekpatches and some new eyebrows of course. The end result was very satisfactory and all we then needed was an outfit for him, which is where of course Abakhan comes in, ah fabric warehouse of joy! I always wanted a Harlequin style of pattern, the kind of material that chef’s trousers are generally made from. Unfortunately the diamonds on the standard fabric are too big to be effective on a small puppet. But a quick trip to the craft shed found us exactly the same design but smaller perfect for our Joey.

And thankfully he is a fairly simple puppet to be starting with, once his onsie was in place with a simpe collar and some hands (and a ring) on we have ourselves a clown ready for the public, indeed he was a big hit at a Christmas Fair this weekend. Just goes to show, all the world loves a clown.

Step the First, Gather Your Troops.

If you are joining this post for the first time, I am going through how we went about building a Punch and Judy set. That’s what I’m doing whether your joining us now or not so I don’t know why I mention it to be honest. More background is available here.

As I mentioned in before, I have no woodcarving skills, this is a big handicap if you wish for a set of wooden headed puppets, as I do. What then are the options? Pay someone to make a set? Although there are many beautiful ones out there, each and everyone is, unfortunately, out of my budget. A cackhanded attempt at making my own? I have too much respect for the trees. So I had to source some cheap wooden heads from somewhere, but where?

END_OF_DOCUMENT_TOKEN_TO_BE_REPLACED

or How To/Not To* Make Punch and Judy

Recently I started to think that the set of puppets I have, although great for children to have a go and handle,

are not traditional enough for the End of the Pier Show. Consequently I wanted good set of traditional style wooden headed puppets, as these to buy can go for anything from £500 to £2000 (Ouch) I decided I would have to find a less expensive avenue to persue. So I resoved to make them myself! One slight drawback, I have no talent for making things whatsoever, at all, nada, zip.

END_OF_DOCUMENT_TOKEN_TO_BE_REPLACED

Took a troll around the museum of Liverpool yesterday and found this couple in pride of place. The history of the Codmans is covered in some detail over at http://www.punchandjudy.com check it out. 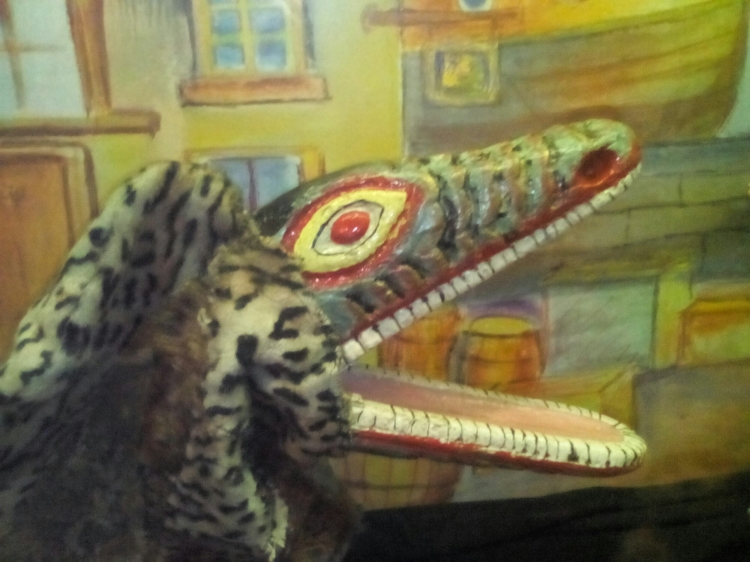 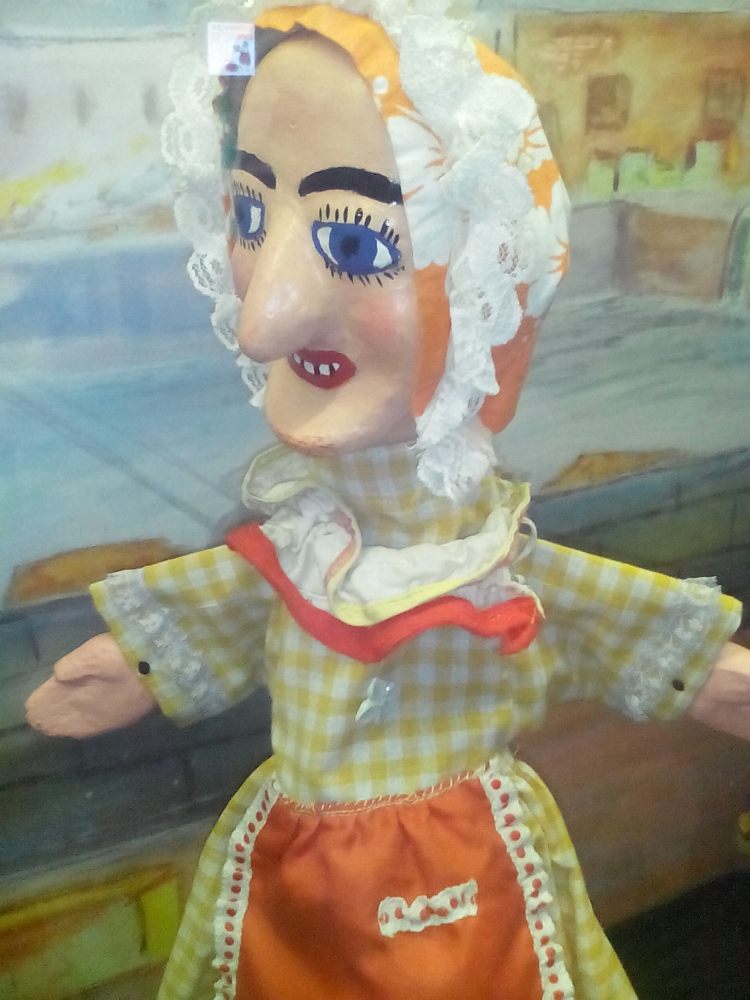 Sorry about the delay, much happening at Llusern Towers. Including the purchase of a brand new Punch and Judy booth and I am currently working on a new set of puppets with traditional wooden heads! My current soft set will then be made available for the children to “have a go”. I intend on publishing photographs of the creation process on here and use them in workshops on puppet making for children in the not too distant future. So watch closely… 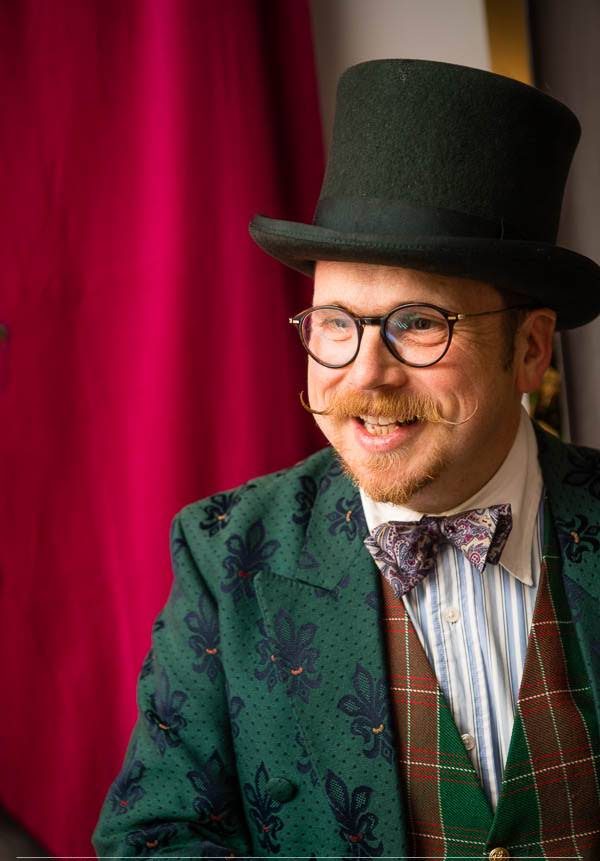