Written by Professor LlusernPosted on December 1, 2014November 30, 2014Leave a comment

Ho-ho-ho, merry Chrimbo. And as we are now properly into advent, which does not begin in August despite what Tesco seems to believe, I think I can safely say that!

The lines above are an introduction to the latest in our lineup, the big beardy man himself, Father Christmas, Siôn Corn.

He began life in this incarnation as a wizard from the Kasperletheater.

As ever the process began by removing the wizard outfit.

Siôn is a rum cove and being that I am emphasising the Victorian of Mr Punch I wanted to avoid an overtly Coca cola coloured Santa. So with an eye towards the Scandinavian tradition and Dickens’ Ghost of Christmas Present I decided to be in with an earthy green coloured base. To go over this I found a nice deep ruby coloured cloth, I think it may have been an offcut from some theatre curtains. I made a long waistcoat from this and trimmed it with some white fur culled from a cheap Santa hat. This is bound in memory of Edward Woodward as the Ghost with a thick black belt, felt rather than leather in this case and a cardboard buckle.

His hat I have taken fewer liberties with as I need him still to be recognisable to the younger generation as Father Christmas (or you end up with the story that accompanied The Lion, the Witch and the Wardrobe, where it was said that when that man appeared in that story many children, especially in America for some reason, didn’t know who he was!) Consequently I used a bit more of the cheap Santa hat to make, well a Santa Hat. 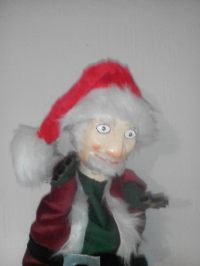 And so Siôn was almost there, but as I said he owes more of a tribute to Dickens than Coca cola so I wanted him to have one last tricksie addition. How can he deliver presents without his sack? But not just any old sack, this is a sack with a secret! But what that is and how it works I shall be keeping close to my chest for now!
So until I see you next, be good boys and girls because you know who’s watching, don’t you?